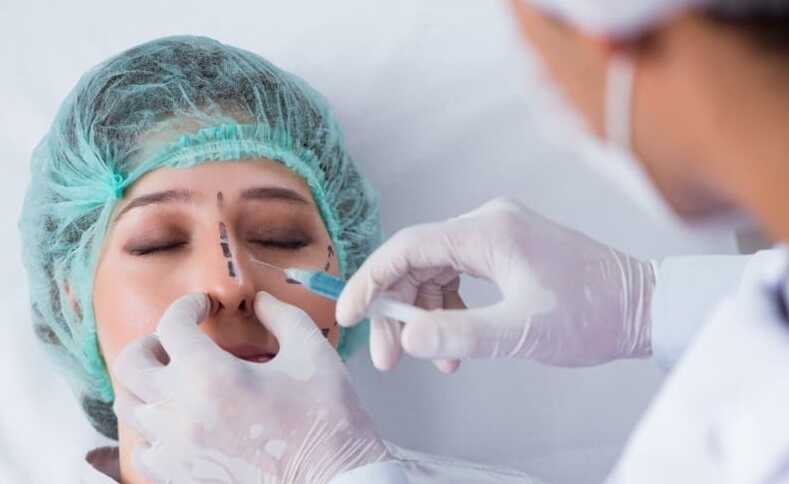 Nose surgery, also called rhinoplasty, is a surgical process on the nose for changing its shape or improving its function. The treatment involves nose reshaping, reduction, or increase in the size of the nose.Nasal surgery is either done for medical reasons like correcting the breathing problems of the nose. Or it’s done to correct the disfigured nose resulting from trauma or birth defects.With the rhinoplasty operation it possible to make the nose smaller or bigger according to one need and wish.Similarly the tip of the nose can be lifted or lowered as the desire of the patient. It is also possible to narrow the bridge of the nose which is the upper bony part of the nose as well as narrow the broad middle part of the nose.To perform the rhinoplasty procedure according to patient desire it is necessary for the surgeon to have thorough understanding of the patient wishes and demand.

Nasal surgeries are of different types, and their use depends on the need of the patient. The common nasal procedures are turbinate reduction and septoplasty. The correction of external nasal deformities or sinus surgery is also important.* Turbinate Reduction: It is a process in which a needle-like instrument gets inserted into the turbinate. Then energy gets transferred to the tissue to control the damage. The turbinate will get reduced with the healing process. It will create enough room for airflow through the nose.* Septoplasty: This process corrects the defects and deformities of the nasal septum. Septoplasty is an attempt to straighten the septum as much as possible. It restructures the bone and cartilage and opens the airway by removing the deformed part.* Rhinosseptoplasty: If the septal deformities are complex or there is a deformity on the external part, a rhinossepto plasty is necessary.* Rhinoplasty: It’s a cosmetic process to reduce or increase the size of the nose. Also, it narrows the span of the nostrils and changes the angle between the nose and upper lip. Rhinoplasty also corrects some breathing problems.

Rhinoplasty can be performed both by open or closed technique.In closed rhinoplasty the incisions are placed inside the nose so not visible from outside.In an open rhinoplasty the incision is on the underside of the nostril which allows doctor to access the internal structures of the nose. Once healed, the scar is barely noticeable. During your initial consultation, Dr. Ahsan Riaz will let you know which technique he will use best according to the treatment plan.

There can be different reasons for defects in your nose that can force you to go for a rhinoplasty. These are:

A nasal surgery will reshape the tip or bridge of the nose, narrow the nostrils, and changes the angle of your nose.

How is the Rhinoplasty Procedure Performed?

Nose surgery start with well placed incision in the middle of the nostrils and then extending it to the inside of the nose. Whole of the tip, the side of the nostril ,base of the nose ,dorsum nose till bony bridge is thus exposed in front of surgeon.This exposure give surgeon opportunity to use his technical skills to reshape and reform nasal anatomy. Any extra bony or cartilaginous components which are effecting the shape of the nose are easily removed .Deviation in the septum of the nose ,deviation of the nasal angle and any bony excrescences are corrected. The surgery normally takes approximately two to three hours depending on the complexity of the case. Sometimes we need to harvest some extra cartilage from other part of the body like ear and ribs to reshape any defect in the nasal architecture. After the procedure you can expect to be at the Cosmagic Centre of plastic, cosmetic and hand surgical center for approximately half away.

Post operative recovery depend upon the duration of the surgery as well as complexity of the procedure.You cannot drive home because of the effect of anesthesia drugs. Your nose may or may not have pack depending upon the type of procedure.If you have pack it will be taken out normally in 24-48 hours in immediate postop visit the cost is included in the package. We do not ordinarily “pack” the nose after surgery. Patients, therefore, are more comfortable and generally less swollen.There is usually very little pain after the operation but if the bony component has been involved in procedure the patient may feel headache. The pain is easily controlled by normal pain killers. After the third day most of the patients do not need analgesia. Other noticeable complications or side effects are bruising, swelling and change in sense of smell. The bruising and swelling normally settles in 7 days or so depending upon the procedure complexity and duration. Patient has to sleep with 2 pillow head up position for 1 week or so so that swelling would settle quickly . Most swelling should be gone after about six weeks; however, there may be a small, virtually unnoticeable degree of swelling present for several months after treatment. The change of sense of smell and nasal numbness does not affect anyone unless he is chef in business. You will be ready for all the social gathering within week time if everything goes well.

Side Effects Of Rhinoplasty?

Although rhinoplasty is a comfortable treatment yet, it carries some risks and complications. However, the condition of every patient can be different from others. Here are some risks related to a rhinoplasty:

Cost of Rhinoplasty in Lahore

The cost of nose surgery might vary a bit according to the reputation of the surgeon. On average, the cost of rhinoplasty in Lahore, Pakistan, ranges from 80,000 PKR to 150,000 PKR.